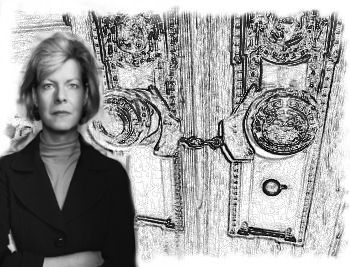 The arrest and cuffing of the Wisconsin State Capital doors really did happen. Walker really did shut down the People’s House in reaction to the massive demonstrations in the early days of his “Act 10” administration. Even U.S. Congressman Dave Obey expressed anger that the Wisconsin State Capitol was closed to demonstrators this week. Obey, who served the state’s 7th District from 1969 until 2011, was himself denied entry.

It just happened again – only worse. No, the physical doors were not locked and cuffed, but last week the doors to the people where locked and shuttered as surely as they were on that cold February day. After years of illegal, back room gerrymandering, stacking the Supreme Court, and buying votes in exchange for handouts of tax credits, real estate, and high paying political appointments – 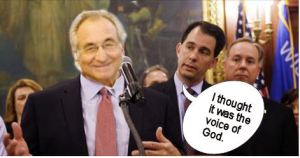 the path was cut to slam the doors of the Peoples’ House in a more devastating ploy than the physical cuffing of the entrance years ago. Slam, Bam, Thank-you Mam! Walker and the GOP just succeeded in a play that would have left Bernie Madoff or Al Capone hopping like students of at a “Jump Around” break at a Badgers Game. Yes in a sweeping power grab, that left the concept of democracy searching for new definitions from WIKI, the GOP passed laws to make it next to impossible to be investigated. All this in the same week that thousands of jobs were lost with the closing of Oscar Meyer in Madison and proceeded by other closings in recent months – Spartech of Portage, Eaton of Watertown – and what is the GOP Assembly, Senate, concerned about? Jobs? NO. Crumbling roads? NO. Making certain they cannot be investigated? YES. Jump Around!

So with a sweep of Walkers pen the wrists of democracy are left slashed and bleeding in a State where we cannot investigate the wrong doing of our democratic political leaders. The John Doe investigation, the investigative action that has a longer life than Walker Administration itself, is no longer recognized as a “legitimate” tool for uncovering the corruption that most of the people can plainly see really did happen. Does anyone really believe Walker did not know about the secret emails being spit out like sunflower shells from a toothless lawmaker? No. All old hat. Jump Around!

What About the FBI

When I looked at the FBI web site they say:

It’s our top priority among criminal investigations—and for good reason.

Public corruption poses a fundamental threat to our national security and way of life. It impacts everything from how well our borders are secured and our neighborhoods protected…to verdicts handed down in courts…to the quality of our roads, schools, and other

government services. And it takes a significant toll on our pocketbooks, wasting billions in tax dollars every year.

And if you follow the link you will see the picture above. The grainy guy in the sport coat reminded me of a pic in my “Walker file”. Yes? No? Is he being investigated? Did they inadvertently pull a picture from an on-going investigation? Probably not.

Best Hope for a Walker Indictment

Thanks to the new legislation, Walker will never face indictment from any investigation within the State of Wisconsin. The only hope for justice must come from the Federal level, and it appears we finally have a representative willing to get the ball rolling. Enter Tammy Baldwin.

In a letter to U.S. Attorney General Loretta Lynch, Baldwin asks for a review of how three loans by the Wisconsin Economic Development Corporation were handled. The loans have not been repaid.Call to DOJ

Here is the link to sign a petition to demand the end of Wisconsin Economic Development Corporation. Citizen Action of Wisconsin

The Department of Justice recommends submitting a tip to your local FBI Field office. You will find the contact number on the same FBI page as the shadowy Walker photo:
Springfield, IL: (877) U-TIP-OFF